The british artist ALEX HODA is known for his fusions of traditional materials and aesthetics combined with the modern technologies of 3-D modeling techniques. Represented in well-known art collections - e.g. Charles Saatchi, Larry Gagosian and John Richardson - his first solo show in Austria „Sprachgitter" will be opened today at LISABRID Contemporary. Talina Bauer met Alex Hoda before the opening for an exclusive interview …

Alex Hoda - your first Austrian solo exhibition is entitled "Sprachgitter". This title refers to the Romanian poet Paul Celan who used the term "Sprachgitter" not only as a title for one of his famous poems, but also defined it as a metaphor that poems give both the readers and the poets the possibility to see a different reality by means of language. What would you say if we applied this metaphor to your sculptures and would claim that they give your audience the possibility of an alienated view of reality? Would you describe this as a goal of your work?

The ambition for the practice is to try to eradicate the boundary between the real and imagined, the physical and psychological, in order to permit the freedom of the mind from external control within the sculptural process. I want the automatic processes employed within the practice to dissolve 'all control exercised by reason, and all aesthetic or moral preoccupations' in order to create true subjectivity of thought (Andre Breton, manifesto of surrealism, 1924). I don't know if it is an alienated view of reality. I feel that this method of working inherently activates the viewer within the creative process, rather than remaining a mere observer. I want to assume a purely passive role as the author, allowing the viewer to complete the conception of the work, thus invoking the sentiment expressed in Dali's ‚Objects Revealed'.

Let me ask you about the bronze and marble chewing gums, which imply very interesting transformation processes: You used small pieces of chewing gum to quit smoking and scanned them using a CAT scanner, printed them in 3D, and after creating wax molds you turned them into bronze and marble sculptures. How do you feel about this ambivalent relationship between the cheap gum, which is - after being chewed - nothing more than waste, and the manifestation of this waste in those very traditional and historically loaded materials?

The 'gum series' was the result of a very personal journey of trying to create something positive out of the negative relationship I had at that time with smoking. I had recently had a child and wanted to give up.

As to chewing gum being a waste? I think that is a subject viewpoint rather than a fact. I suppose it's about offering up new possibilities for what we traditionally see as waste products. I suppose I want to challenge the viewers 'go to' opinion of what they expect to see made out of traditional sculptural materials and undermine this preconception by using something humorous. 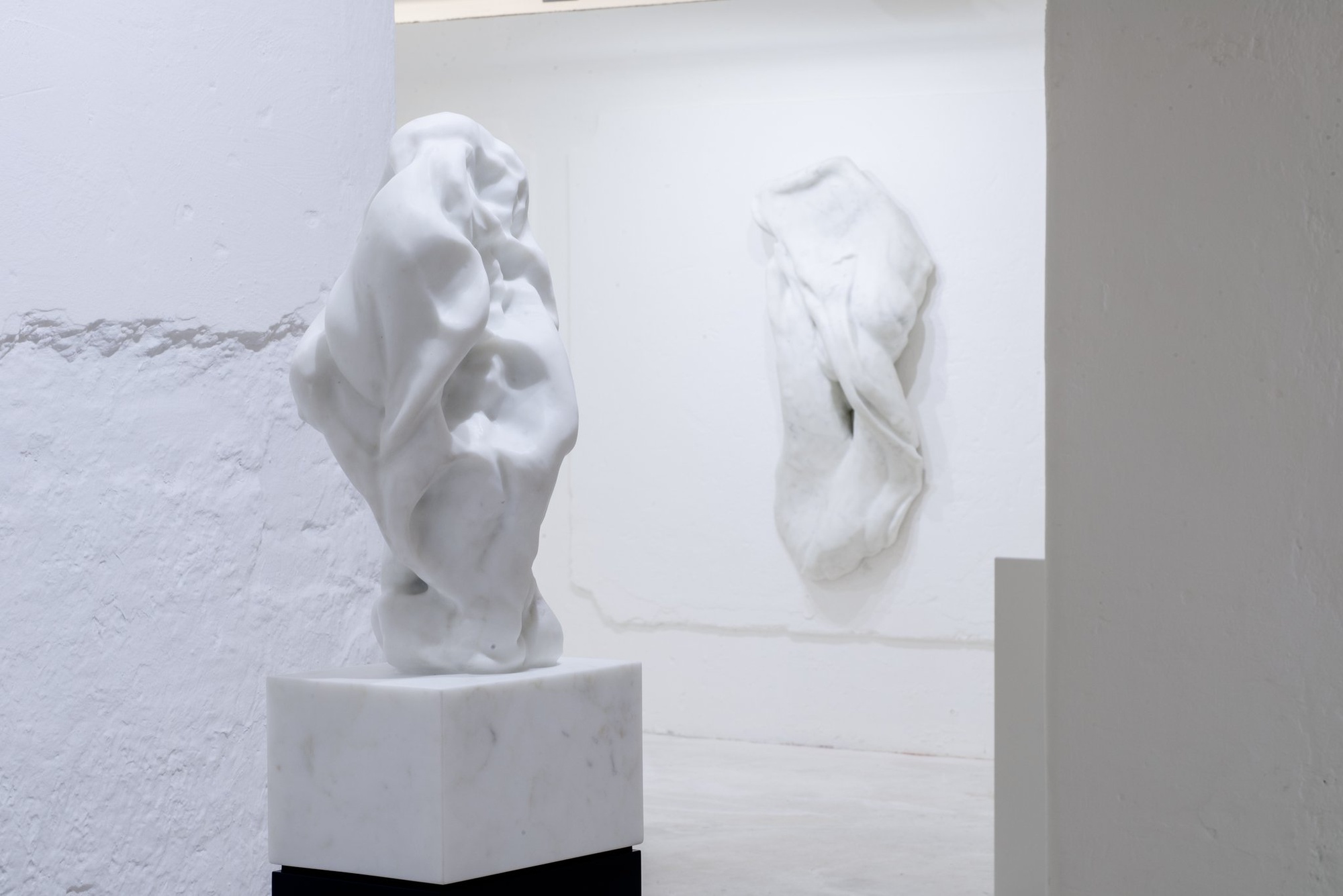 When talking about your work we heard you use the term ‚contemporary surrealism' - in what way does Surrealism play a role in your work?

I aspire to align my work with many of the goals of the Surrealist movement - the reconciliation of the conscious and unconscious, and its location of the object within a utopian space that is, precisely ‚nowhere'; a space of possibility that is entirely contingent, and whose contingency is realised in the fragmentary and temperate nature of the object's conception.

Yet unlike the aesthetics of the Surrealist movement, that owed much to their relationship with cubist assemblage, I hope to position the work goes beyond the sculpture itself - into the object, understood at the same time to be antiformal and antiaesthetic in its rejection of style and content.

Paul Celan often works with the stylistic device of a ‚paradox' - aren't your works highly paradoxical as well? Ephemeral chewing gum, banana peels, garbage as aesthetically tangible objects that, once transposed into a new medium, are sold at incredibly high p rices - from the filthy landfill to the trendy art market?

Again, I don't see the initial objects as waste. A similar argument could be made for saying that all paintings are just smears of coloured dirt on some waste product of the cotton plant! The project as a whole is an exploration into the way in which we place objects in a hierarchical order; the categorization of images, objects and materials seems to me paramount in how we view reality and in particular art. Are these things learnt or are they inherent how we judge the object? I hope in some way to dislodge my own understanding of how I view the world and I hope it might do the same for some people who view them.

What makes bronze and marble so interesting that you use them in your work?

The transformation of an ephemeral object into something permanent through an almost alchemical process is what truly captivates me. The method of scanning the object and then either casting it or milling it out of marble is for me a type of ‚sculptural photography' - it is capturing a specific moment of an idea in time and space, and endowing that moment with material permanence.

What are your expectations about the exhibition at LISABIRD Contemporary?

I never try to expect anything. I would like to have a fun time and explore the city of Vienna! This will be my first time here!

Thank you so much for the interview!